St Peters Beer Kits have been a great seller for Geterbrewed right from the off, a solid beer every time and produces consistently impressive results for ale drinkers, we highly recommend their Ruby Red Ale Beer Kit
Product Compare0
Quickview 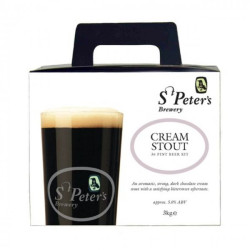 Code: GEB0567
St Peters Cream Stout 3.0 kg
St Peter's Cream Stout Is made using the finest UK malt and hops allowing you to recreate this brewery style beer in your home. This 36 pint kit brews a creamy chocolate stout with a final strength of about 5 % ABV.The commercial version of this beer was a Silver Medal winner in the International B..
£23.90
Ex Tax:£19.92
Quickview Add to Cart
Add to Wish List Compare Product
Buy Now Ask Question
Quickview 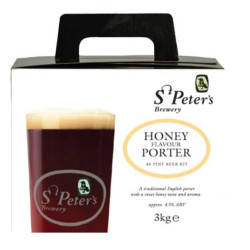 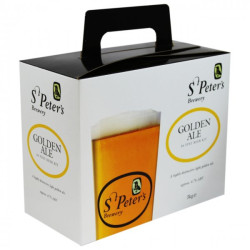 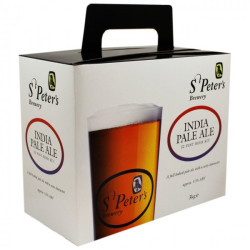 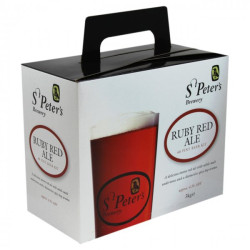 There is five varieties of St Peters home brew kits

These are BREWERY DEVELOPED HOME BREW KITS allowing the homebrewer to make a pint of beer at home as good as the pint bought down the pub. St Peters home brew kits are of outstanding quality they use Suffolk locally grown barley in pale, wheat and coloured forms and these malts are carefully blended together according to the individual beer recipes.

The grist is then gently mixed with heated liquor (i.e. water) to produce the "mash". Control of temperature is critical here as it affects the beer all the way to the glass. The mash is next left to stand for one and a half hours while the starch and proteins from the malt are broken down to form sugars and other nutrients that the yeast will need during fermentation.

The nutrient-rich liquid which is produced is called "wort", is separated from the solid components of the mash by a process similar to coffee percolation, hot liquor is sprayed over the mash surface and clear wort is drawn through the bed of grains and collected in a vessel called a copper. Once all the wort has been washed from the mash it is brought to the boil in the copper.

From this point onwards hops are added at various stages to produce the characteristic hop flavour and aroma of St. Peter's beers. Challenger hops, grown in Kent, provide a strong, typically English flavour while Goldings give a rich and fine aroma. Cascade, and Fuggles hops are also used along with Suffolk Grown, First Gold, Sovereign & Boadicea.

Once boiling is complete the wort is separated from the hops and cooled on its way to the fermenters, normally at this stage it would have the yeast added but it is then condensed and canned as concentrate and a yeast sachet is included.

The yeast used at St. Peter's and which creates the beer, was hand-picked from a collection of over 350 different strains held by the National Collection of Yeast Cultures based at the Institute of Food Research in Norwich. Their chosen strain gives all St. Peter's beers their unique character while the combination of yeast, malt, hops and water all help to create beers of the highest standard, full of English character. A brewery home brew kit that will really impress your friends and family, we at Geterbrewed highly recommend this home brew beer kit, a must try beer kit range